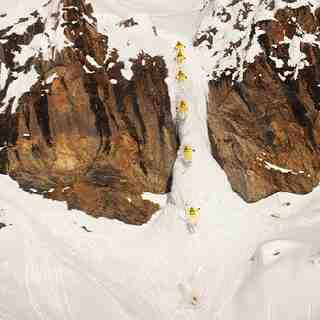 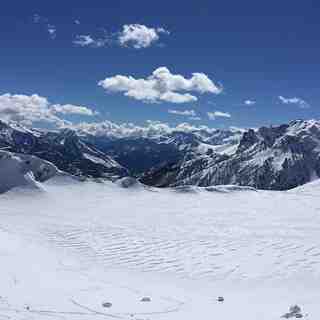 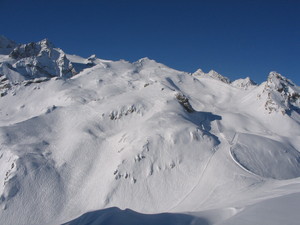 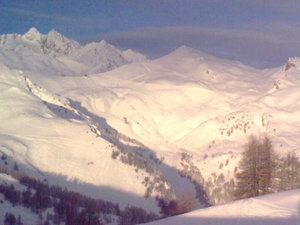 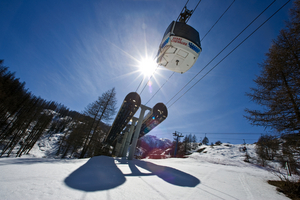 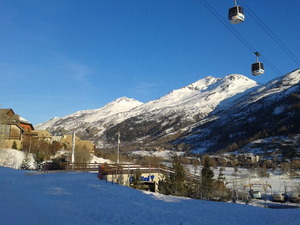 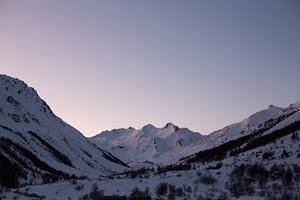 Serre Chevalier is situated in the French Southern Alps, bordering the mighty peaks of the Park National des Ecrins and Italy. Thirteen villages and scattered hamlets are nestled along the upper valley of the Guisane river. This area receives more than 300 days of sunshine per year and has an impressive snow record. Serre Chevalier has extensive infastructure with 60 lifts and 100 groomed trails. The total terrain at Serre Chevalier is 1170 acres. The nearest airport to Serre Chevalier is at Turin.

Probably my favourite ski resort! I spent a good few weeks here in 2022 on a season pass, it is one of the biggest resorts in France for piste length, I didn't go off piste but I was told they have good options for that too.
Getting here is perfectly easy, although not necessarily from Geneva. I like the night train from Paris to Briancon, which is the main town and genuinely in Serre Chevalier, there is also a regular bus from Grenoble and connections from Turin by either bus or train.
The variety of pistes is great and the area itself is quite compact. Possibly there could ideally be a few more black runs but a few of their reds could easily be upgraded in all honesty. Pylons is the best black and petit Alpe and Echaillon are challenging reds. You can basically go everywhere on chairlifts - the way up from Briancon is the only exception - so no need to take off your skis and the time spent going up to going down is much better than other resorts I have been to (eg Alpe d'Huez).
Despite the size of the resort even relatively basic intermediate skiers have a lot of options. The whole resort can be traversed "left to right" on blue slopes, coming back there is the bus, or one long but relatively easy red (Cucumelle) is the only difficulty. Decent and better skiers can also enjoy some fun blue runs, the half-pipe-esqe Tetras stands out as well as Pas de l'Ane (take the first left). One of the defining features at Serre Che for me is that the pistes have character - these are not typically just roads of varying steepness on the side of a mountain - it feels like each piste, or most at least - are different with their own difficulties and characteristics. Some are bumpy, some narrow and undulating, some fill with powder and others, simply fun!
Logistics deserve a mention. Serre Che is set out along one valley with a bus running end to end. This means if you end up in the wrong place at the end of the day the max cost is two euros, not a two hour taxi from another valley (or country - PdS!) The bus runs through the day, including to the train station, so is genuinely useful for bringing you to your accommodation and taking you home on the last day. The best places to stay probably are any of the villages except Monetier or Briancon - while both are very nice your chances to ski back directly rather than taking the afternoon bus are much greater here. Briancon also has trouble with wind - if the way up is closed the bus to other villages is thankfully free - but we all prefer skis to wheels so still not ideal.
A few negatives. The wind in Briancon. Famous for sun, being on the southern side of the Alps means potentially less snow. When I was there unluckily it snowed very little, although many places in France had this experience, it is less snow sure than other resorts. However, snow making was good and the skiing was still great fun, we mostly lacked off piste. The bus is not really designed for skiers, Briancon is a real town in the Alps - in the morning you may squeeze your skis next to a real person going to work. The transport from Turin was a bit dysfunctional, although this is not really a fault of the resort it does complicate things. If you don't speak French and use public transport and ignore a warning that the bus is cancelled then that is on you, sorry! Quite a few pistes didn't open much or at all in 2022 - none of the blues down into Briancon were ever open that I saw, neither the black into Monetier.
Finally, the eco credentials are worth mentioning. Serre Che seems to have gone in on renewables more than most resorts. Quite a few chairlifts are covered in solar panels which are alleged to produce more than they consume. The water pipes for snowmaking have been repurposed for hydro electric storage and generation, and there are two wind turbines as well. Only two seems like a gimmick - it seems that every ski resort should have more considering their elevation, but it is a start I suppose. And finally, for the eco conscious, by far the largest part of our carbon footprint when skiing is flying to the resort - and Serre Che has a direct overnight train from Paris to Briancon - and train + bus options from Paris via Grenoble or Modane, so if you really want to help make skiing greener, give the train a chance!

Read 56 more reviews of Serre Chevalier or submit your own 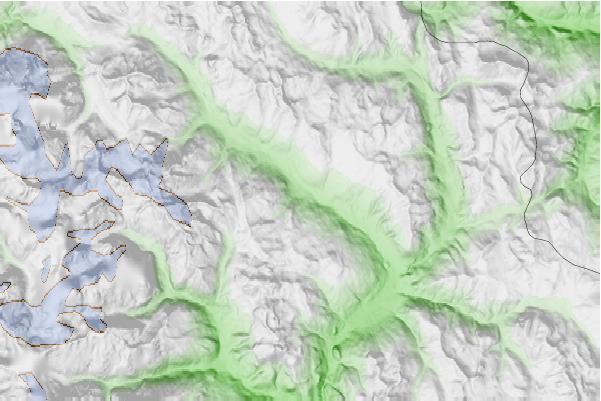